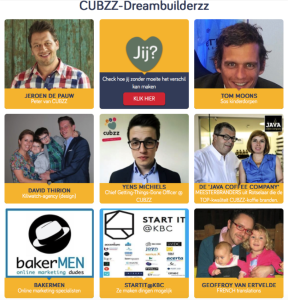 “The succesfull brands & businesses of the future will be those that have a purpose beyond profit. No consumer has ever bought something with the intend of making the owner of the company rich. “

We’ll set up a new sustainable system that generates continuous resources for existing organisations that are committed to children. It is to be fully built on our everyday consumption, because that will never cease. Public awareness about CUBZZ is key and because we spend our money on doing as we say, we don’t have any to tell our story. We need others to do that for us and launched the concept of DREAMBUIDERZZ. This is an individual, a business or any kind of public organization that feels that with CUBZZ we have the opportunity to change the world for millions of children. As long as we do as we say and get our story told. Dreambuilderzz are in some sort of active partnership with CUBZZ in which they look for ways in their standard business operations to get CUBZZ on track. They talk about CUBZZ to their friends & foes. They endorse the brand and its products. They share the dream and try to get others to join. When a dreambuilder is authentic in their intent, it will show, and partnering with CUBZZ will benefit their own business & social goals.
CUBZZ is constantly looking for new DREAMBUILDERZZ to add to its legion. We’re welcoming new individual fans every day. Our story becomes their story. And that’s what it should do. Since very recently we’re proud to announce Telenet’s commitment to CUBZZ as well as that of Solvay. As we go, initiatives for natural collaboration will be thought out, tested and implemented? The partnerships with these dreambuilders will grow, and CUBZZ is constantly looking for new ones. The perfect DREAMBUILDERZZ are those who have a large network of their own, who’re listened to when they ‘speak’ and last but not least, who have the moral authority to credibly endorse a dream and a story like CUBZZ.

• For the business/the company
Consumers prefer spending their money with a business with human values & a soul. Where the authentic choice to endorse CUBZZ becomes clear, consumerpreference for that company will rise.
• For the children
The more succesfull CUBZZ becomes, the more resources will flow to giving kids a chance.
• On the market
The better known CUBZZ becomes, the more people will get inspired. The more people will realize that up to this day we’ve all been spending money on companies that have a mere objective of shareholdervalue.
• On an overall context, with respect to the different registered themes

Ikea: Fund for Children and Parenting